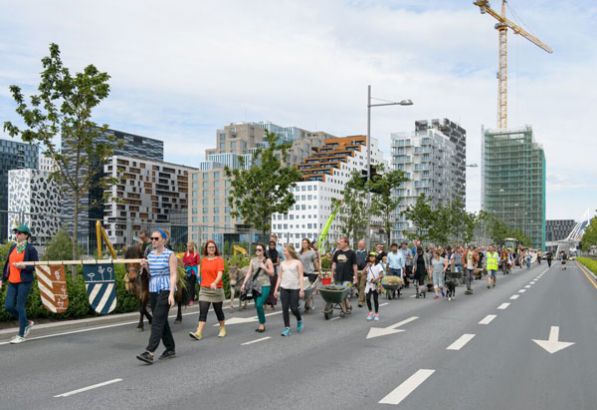 On June 13, 2015 a procession of farmers carried soil from their farms through the city of Oslo to its new home at Losæter. Soil Procession was a GROUND BUILDING ceremony that used the soil collected from over 50 Norwegian farms from as far north as Tromsø and as far south as Stokke, to build the foundation of the Flatbread Society Grain Field and Bakehouse. A procession of soil and people through Oslo drew attention to this historical, symbolic moment of the transition of a piece of land into a permanent stage for art and action related to food production.

At high noon, farmers gathered at the Oslo Botanical Gardens joined by city dwellers. Tractors, horses, wagons, wheelbarrows, musical instruments, voices, sheep, boats, backpacks and bikes processed to Losæter where the farmers’ soil offerings were laid out upon the site and a Land Declaration was signed. 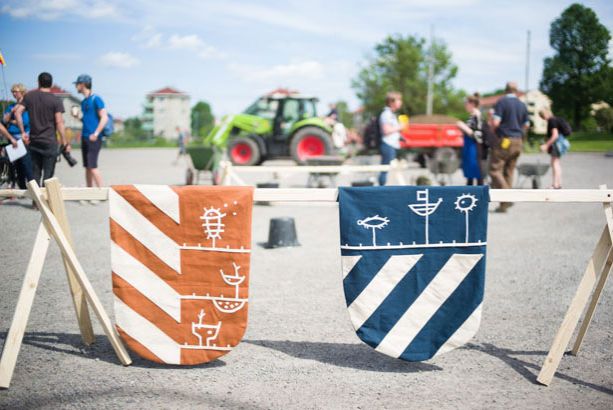 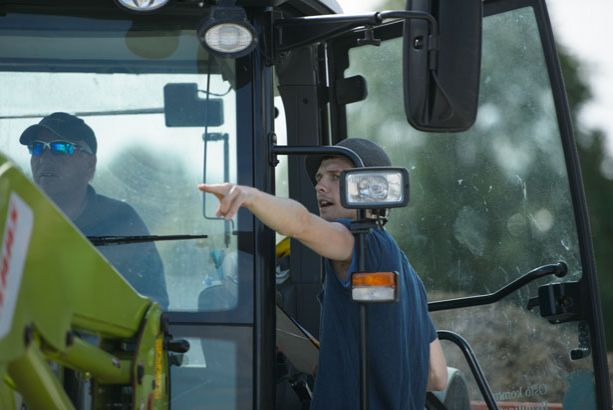 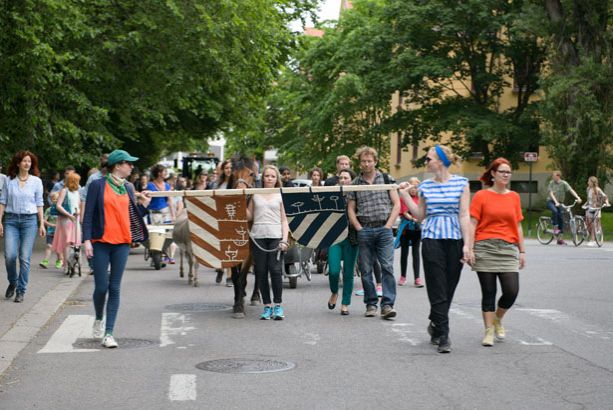 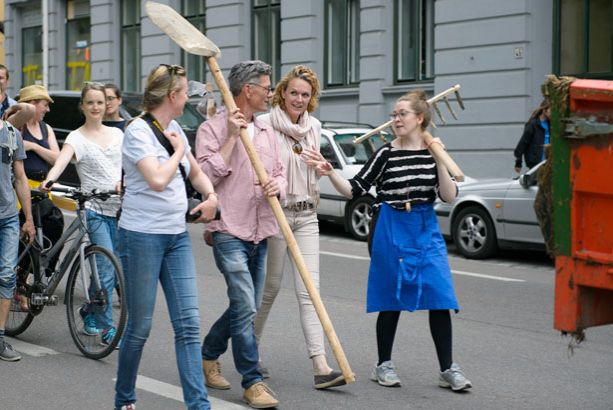 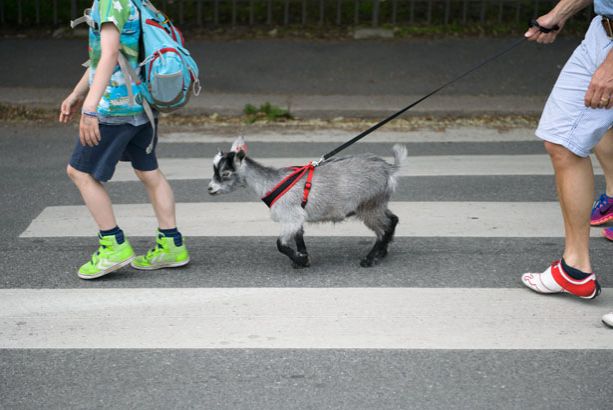 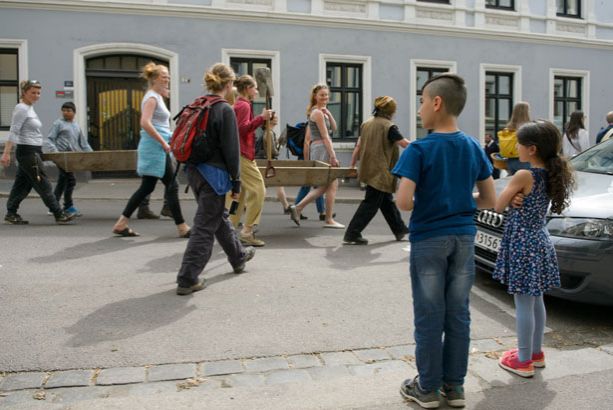 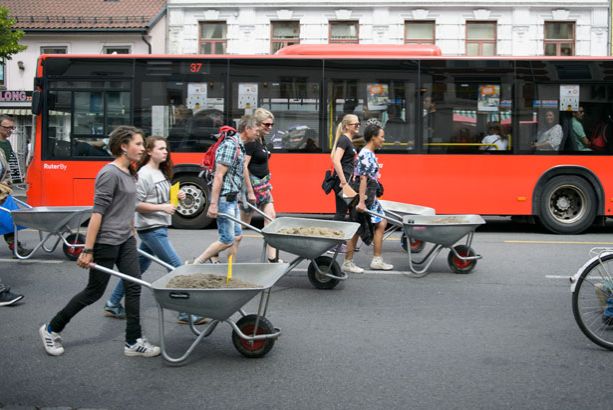 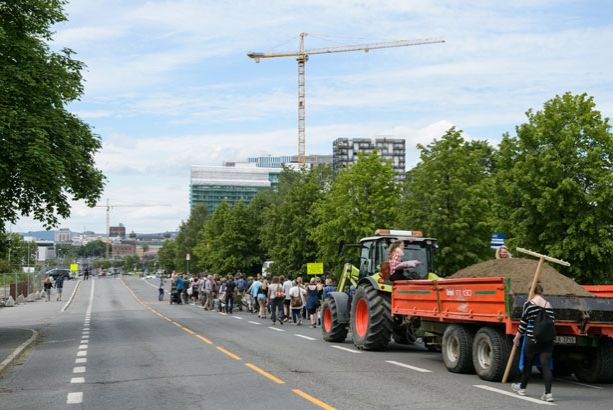 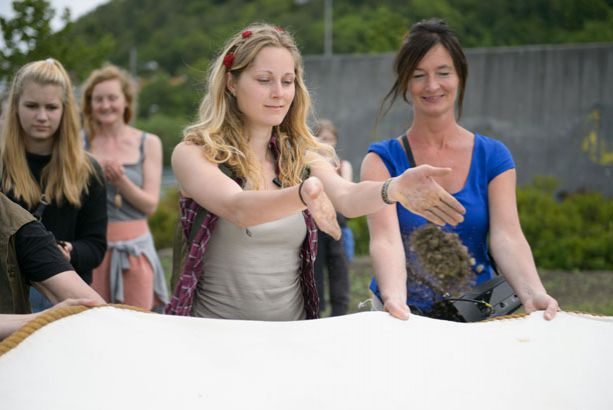 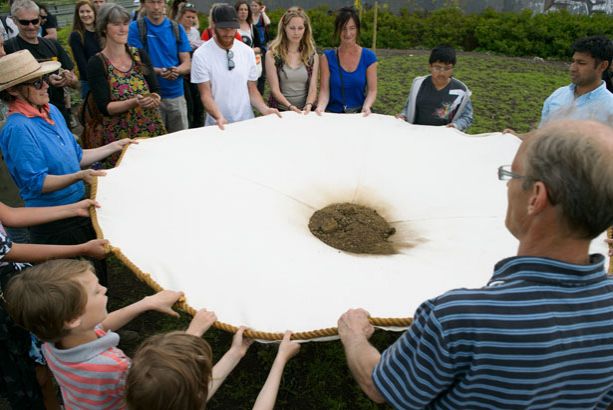 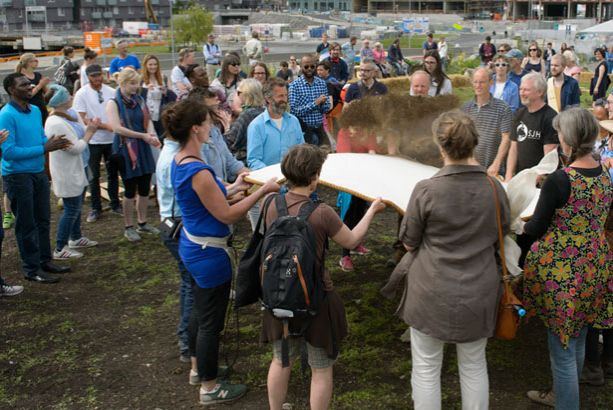 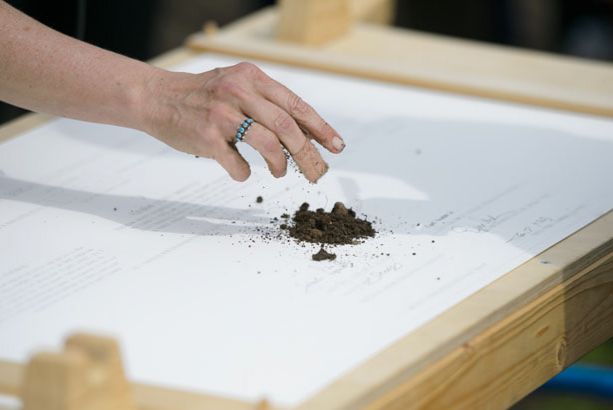 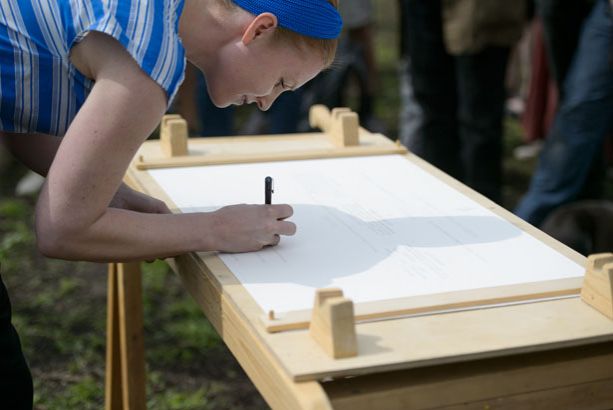 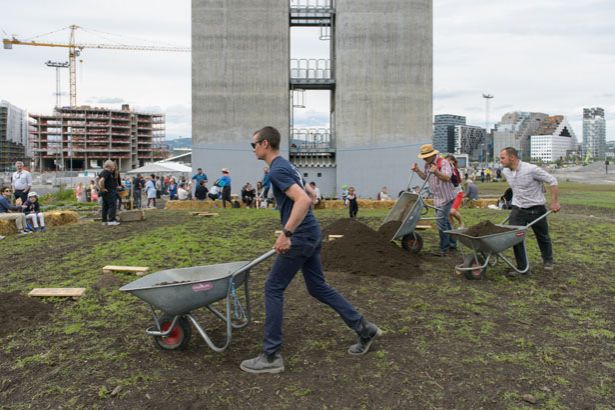 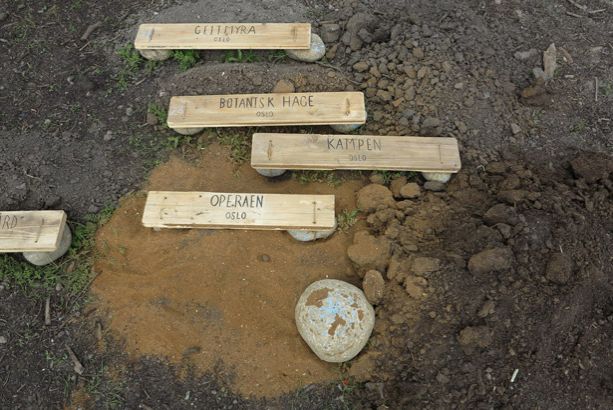 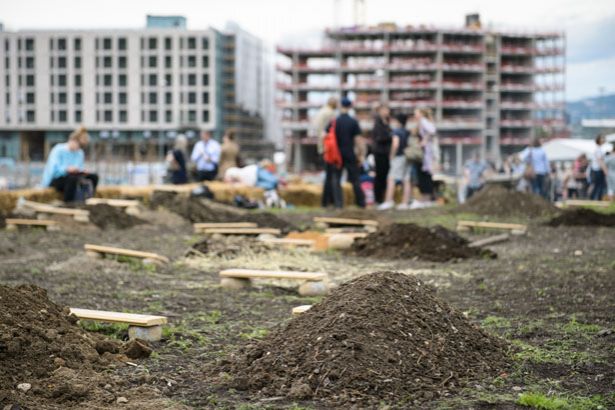 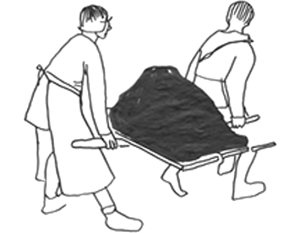 Beneath the Farm: Clay, Futurefarmers
A workshop transforming the farmers' soil into clay vessels. A series of 41 vessels will be made in a temporary kiln built on the site. These vessels will live permanently in the Flatbread Society Bakehouse and will store seeds harvested from the Grainfield– sealed with wax from Oslo Apiary.

Calling the herds: The tunes of the sæter
The Cafeteatret World Choir and NBX Theater School, led by Norwegian folk musician Eli Storbekken.

The Cooking Pit, Kjartan Fønstelien
Prehistoric and universal cooking with earth. How pagan man made food for feasts!

Hive is Home, Oslo Apiary
A ceremony marking the permanent home for the bees.

Seaweed as Fertilizer, Zoe Christiansen
Cooking and fertilizing the future with seaweed from the Atlantic ocean.

Beneath the Pavement: Feast, Food Studio with Masayo Funakoshi
A locally harvested feast to celebrate the farmers who came from far and near. 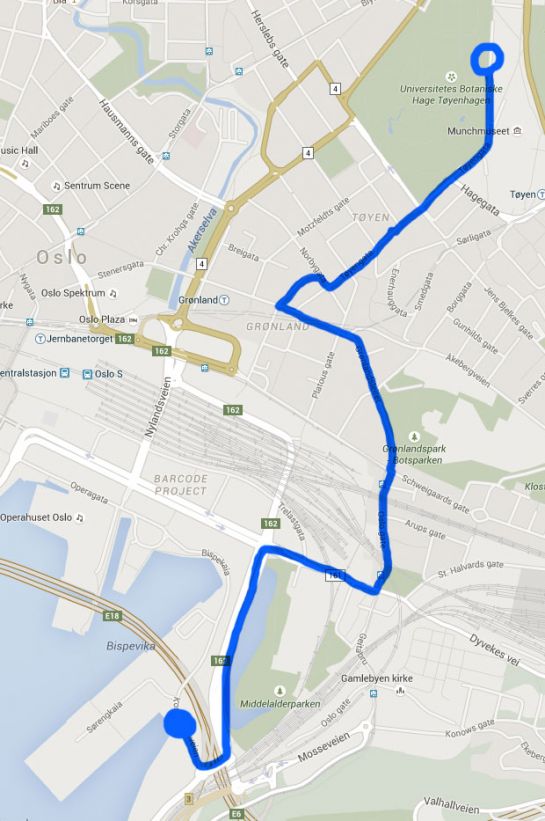 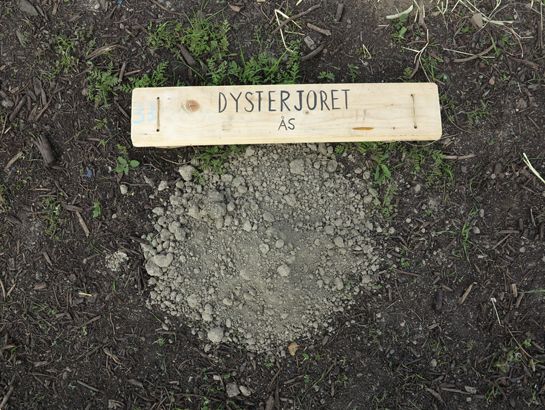 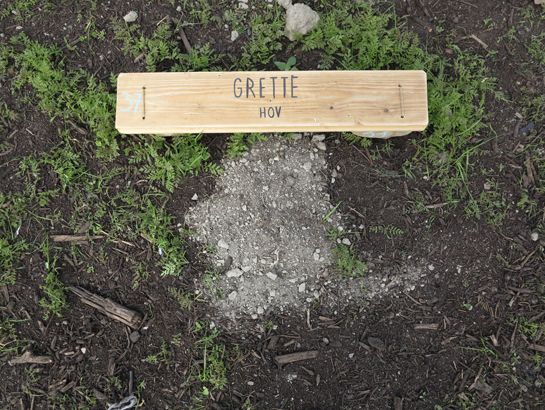 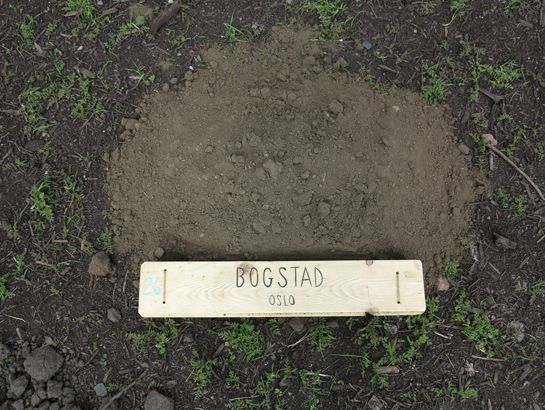 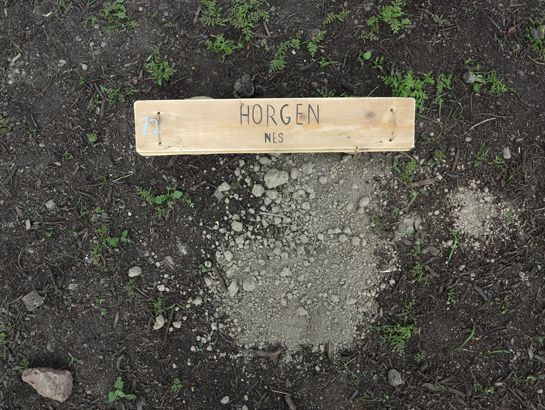 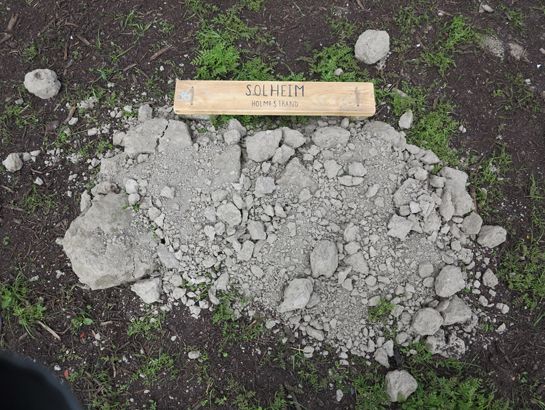 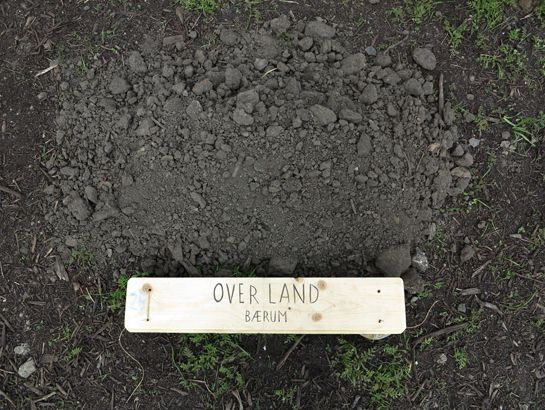 Food Studio, Oslo
An independent collective of professionals who believe in good and honest food and are open to new ideas and solutions for the future of food. Food Studio utilizes a collaborative approach involving specialists in the food industry, ranging from foragers to farmers, designers and innovators.

B. Kjartan Fønstelien, Oslo
Kjartan is a conservator at Nord-Jarlsbergmuseene. He has been working with food, food history and the prehistory of food during his whole career; both from a theoretical and practical view.

Oslo Apiary, Oslo
A cultural entrepreneurship run by Marius Presterud and Mikkel Dagestad that uses rooftop beekeeping as its platform. With Oslo Apiary they hope to keep livestock in an urban environment as well as commission and exhibit eco-art projects.

31B, Oslo
The activity center 31B is a low-threshold service within Mental Health. They provide artistic activities for their users – music, graphics, painting, as well as running a bicycle workshop, a gallery and frame shop.

Caféteatret, Oslo
An independent theater institution established in 1992 and run by the Nordic Black Theatre, which produces performances and collaborates with other artists, developing young multicultural artists through the Nordic Black Express.

Take a look at or download the Soil Procession poster. The original is a letterpress and screenprinted poster of 16"x22". 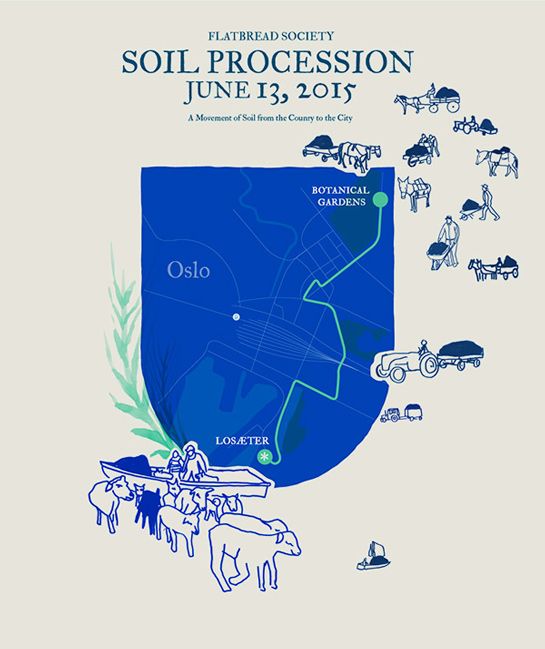 <<
INTO THE GROUND AND UP TO THE SKY
>>
Bakehouse workshop: Alternative Economies + Form and Function