February 24, 2014
A visit to the Vavilov Institute
Saint Petersburg, Russia 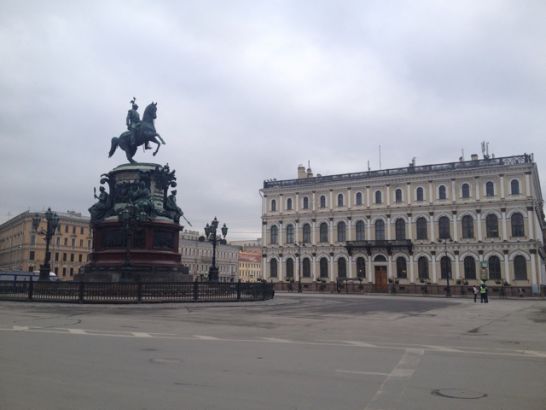 Did you know that gene banks hold a publicly available material? That it is actually possible for another public organization or even a private farmer to contact a gene bank and receive a sample of a seed? A gene bank is a public institution. A collection of human and not human histories stored by number of scientists that is available for your use.

This was all unknown to me when Flatbread Society asked me to visit the Vavilov Institute of Plant Industry in Saint Petersburg. Her request to meet the scientists and ask them several examples of bread seeds for Flatbread Society sounded to me as a peril. In February 2014, I met Professor Igor G. Loskutov, a curator of the Oat collection, and a scientist who has worked at the institute for more than twenty years. The Vavilov Institute shrunk as an institution in recent decades as a result of a general economical downturn. However from a glorious past it still occupies two identical four-story buildings, built one in front of the other as a ministry of public relations in early 20th century, just behind an Isakivskij Sobor (St. Isaak’s Cathedral), one of the main city cathedrals. The building recalls soviet imperialism, it reminds a museum with hundreds of plants on the windowsills along with maps, photographs, medals and diagrams, samples of framed wheat, oat, rye and different flowers. 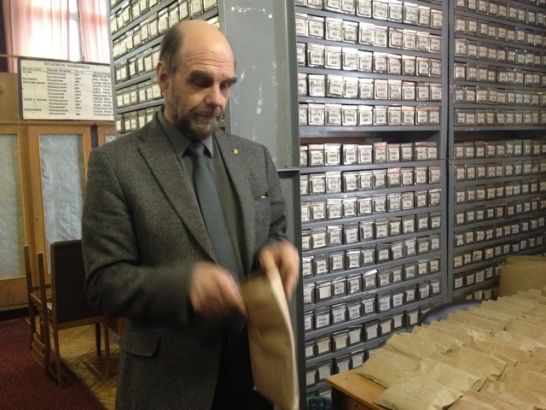 Prof. Igor G. Loskutov showing examples of the seeds inside the collection of oat 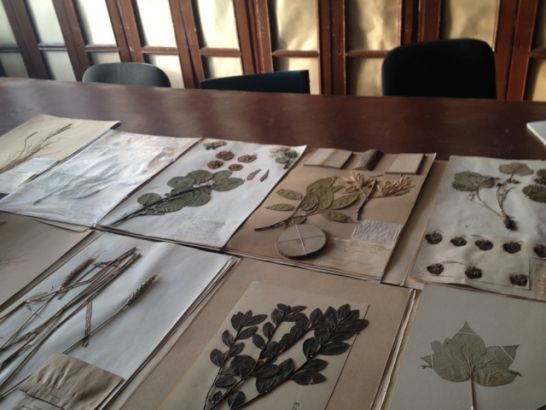 The Herbarium of the Vavilov Institute. With Dr. Tamara Smekalova

The Vavilov Institute holds one of the world’s largest and oldest collections of plant genetic resources as well as a collection of seeds. The Vavilov Institute has experienced difficult and tragic moments during its existence. First is the story of Nikolai Vavilov, who directed the institute from 1924 to 1936. A great man, and the father of plant industry in Russia, Vavilov's life and creative work have been inseparable from the world's largest crop research institute. Vavilov is recognized as the foremost plant geographer of the modern era. To explore the major agricultural centers in Russia and abroad, Vavilov organized and took part in over 100 collecting missions, wrote numerous scientific studies and was an active member of the scientific community. The missions to search for plants were based on Vavilov's theories? on evolutionary genetics (Vavilov was a follower of Darwin), 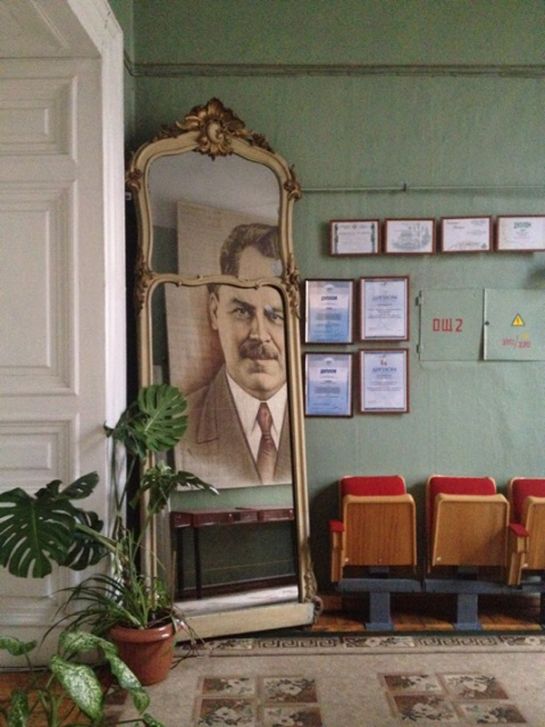 The corridor of the institute with a gobelen portrait of N.I. Vavilov reflecting in a mirror 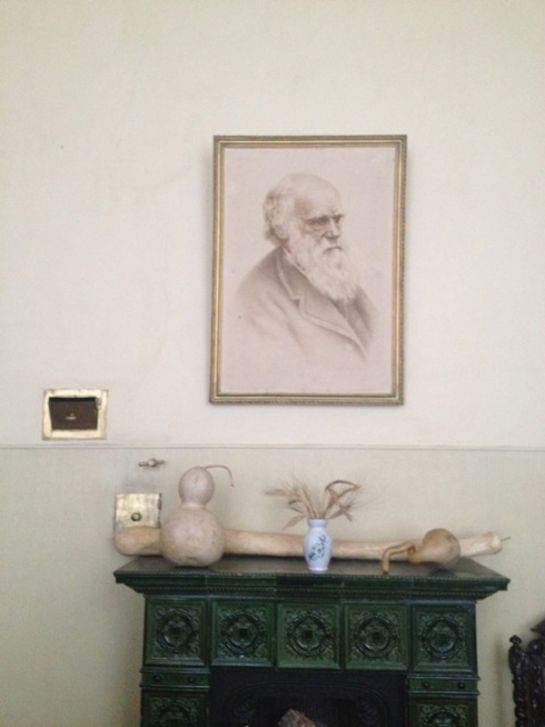 Charles Darwin portrain in the cabinet of N. I. Vavilov

Vavilov, the symbol of the glory of national science, is at the same time the symbol of its tragedy. By the early 1930s his scientific programs were deprived of governmental support. In the stifling atmosphere of a totalitarian state, the institute headed by Vavilov turned into a site of resistance to the pseudo-scientific concepts of Trofim D.Lysenco, an infamous scientist who proposed, for example, to feed cows with chocolate in order to increase fat in milk. As a result of these controversies and conflicts, Vavilov was arrested in August 1940, and his closest associates were also sacked and imprisoned. He died in the Saratov prison of dystrophia on 26 January 1943 and was buried in a common prison grave.

Nevertheless, the memory and work of Vavilov were preserved by his followers. During that tragic period, these devoted people and scientists gathered together Vavilov's manuscripts, documents and pictures, and cared for the collection of plants after Vavilov’s arrest. Since the mid 1950s, after the official rehabilitation of Vavilov when after the Stalinistic period he was again recognized as an important scientist, hundreds of books and articles devoted to his life and scientific accomplishments have been published.

In 1941 the second World War brought a major tragedy in the life of the city of Saint Petersburg (Leningrad at that time): a Siege of Leningrad during which the city was blocked from all supplies for 900 days. On 22 June 1941 German Nazi troops crossed the Soviet border and quickly began occupying the territories of the Baltic Republics, Ukraine and Byelorussia. By September they reached Leningrad. The German command had a plan to destroy Leningrad, but stout-hearted defenders of the city forced the enemy to halt at the outskirts. Even before the city was surrounded, the Government issued an order for the evacuation of a number of industrial enterprises and institutes from Leningrad. The All-Union Institute of Plant Industry was on the list, but its evacuation was never accomplished. While some scientists and technical workers were sent to the front, a great number of specialists worked on constructing fortifications around Leningrad. The largest and most important part of the collection was left in the besieged city. The remaining staff endured the most severe conditions imaginable under the siege during the winter without any heating. In this cruel winter the daily subsistence ration consisted of only 250 g of bread and bran mixture for one food coupon for scientists and 125 g for other people. In the dark, freezing building of the Institute, the remaining workers prepared the seeds for long-term preservation in the city. While they divided the collection into several duplicate parts, bombs and shells continued bursting around the Institute, damaging St.Isaac's Cathedral nearby. Fortunately, VIR's safety was assured because it was located near the German consulate and the Astoria Hotel where Hitler had planned to hold a victory banquet and had even ordered the printing of the guest invitations. In spite of these difficult conditions, the scientific activities in the Institute continued uninterrupted. 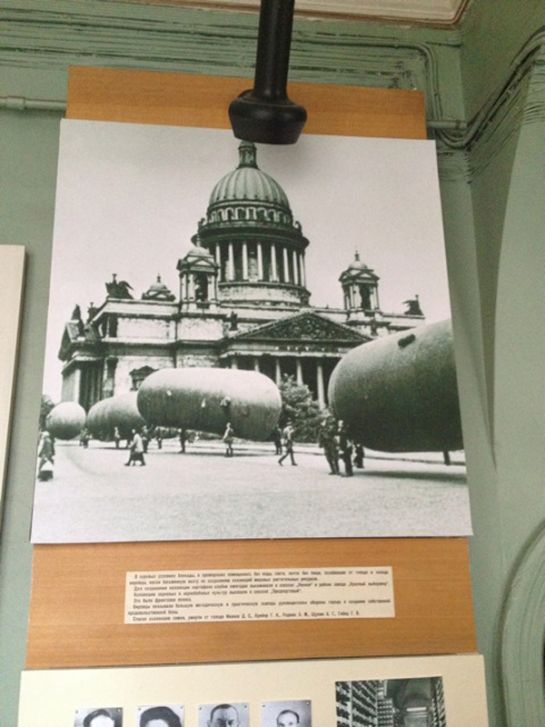 A square of Isaak's Cathedral during the Siege of the Leningrad

In the winter of 1942, hordes of mice and rats swarmed into the Institute's building at 44 Herzen Street. All efforts to protect the collection against the rodents were fruitless. Rats started invading the metal boxes through existing openings and devoured seeds and grains. Then the malnourished workers decided to tie the boxes together and place them between the shelves. In this way, 18 rooms were used to maintain the collection. Tying up the boxes and their reinstallation proceeded in the freezing premises of the Institute, illuminated only by kerosene lanterns. Shelling had smashed the window glass and the windows were blocked with plywood, which provided more protection for the collection accessions. All the rooms were sealed, and every day the workers checked the seals, also making monthly inspections inside each room. Every day, three to five employees were on duty for 24 hours. At this point starvation was raging in the blockaded city, killing dozens of thousands of citizens, among them many of the Institute's workers. In the first months of the siege, E.V. Vulf, a botanist and well-known expert in volatile oil plants, was killed by a shell splinter. In January, A.G. Shchukin, a specialist in groundnuts, died at his writing table. G.K. Kreier, head of the herb laboratory, and 0.5. Ivanov, a rice specialist, also succumbed. After Ivanov's death, workers found several thousand packs of rice in his collection that he

had preserved while dying of starvation. L.M. Rodine, a keeper of the oats collection, suffered the same fate. Other workers - M. Shcheglov, G. Kovalevsky, N. Leontjevsky, A. Malygina, A. Korzun and others - died of starvation as well. As they slowly starved, they refused to eat the seeds from any of their collection containers of rice, peas, corn and wheat. They chose torment and death in order to preserve Vavilov's genebank (Krivchenko 1991)..

My 82 year-old grandmother survived the siege in her adolescence. She told us, her grandchildren, a story of how once she stood in a queue for bread on a winter night. She lived just across the Vavilov Institute on a square of Isaakivsij Sobor (Isaac's Cathedral). She stood in a line to get the daily dose of 125 g of bread for her family, four members out of an original five as her older brother died of starvation in their house in the winter of 1942. After five or six hours in the queue her turn came and she gave the tickets for food to a woman, who accidentally gave my grandmother 175 g of bread instead of 125 g. She said her heart started to beat faster—she couldn’t believe this miracle as the hunger was impossible to suffer anymore. But then she realized that if she took those extra 50 g, someone else wouldn’t get the bread to eat. So she gave it back.

That story stuck in my memory. For the very same reason thinking of the Vavilov Institute scientists who died of starvation without touching the seeds from the collection, is so appealing and dramatic and at the same time improbable up to the level of absurdity. What is that ideal of humanism , what is that heroism, and why do some people sacrifice for others? Why where it used to be the bread-point it is now an artists’ supply shop ‘lavka hudozhnika’? This is completely unrelated information. Where is the difference between consciousness and absurdity? 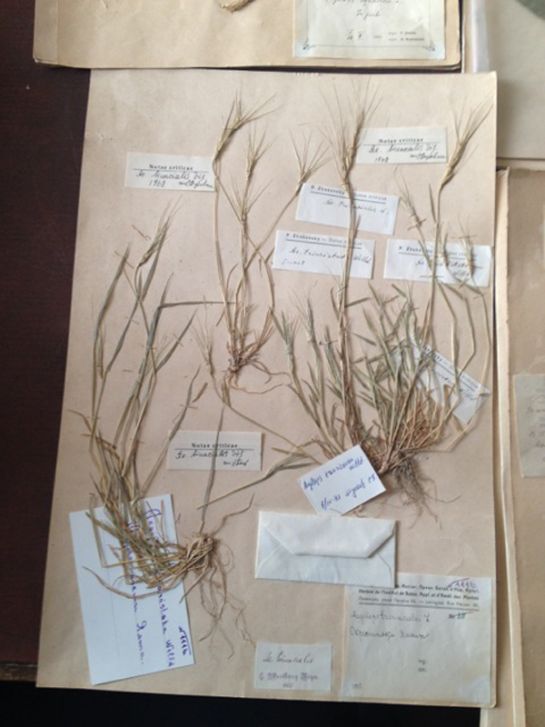 A herbarium of wheat, collected by N. I. Vavilov

The next day I visited the herbarium of the Vavilov Institute. I met Dr. Tamara Smekalova, a woman with whom we had a very inspiring conversation. She showed us the original plants once collected by Vavilov and his followers. The reverence for Vavilov continues to this day: it is beautiful that for example if a scientist finds that the described plant is somewhat different then he researched, s/he sticks a small paper on top of it, but never overwrites on top. She shared some stories of expeditions to the fields, and we talked about bread traditions throughout the world. We spoke about plant breeding and she said something that stuck in my mind. She said that finally, with new crops of bred seeds, all humans were fed for the first time in the history of humankind. For thousands of years mankind struggled due to a lack of food and finally everyone could eat bread. 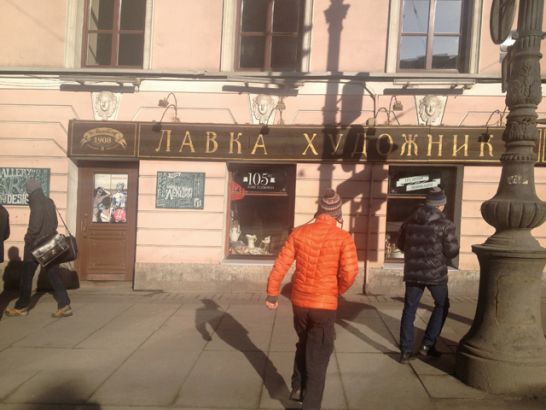 Of course, of course, of course – it is now very different. Professor Igor G. Loskutov explained that the bred seeds mutated by men have to be taken care of constantly, like children. One year these crops give a bountiful harvest and suddenly the next year – nothing. They are very sensitive to weather, water, and wind, for natural climate change. The old cultures of seeds naturally evolved in response to different conditions and are stable, endurable and persistent. They will provide a harvest every year, and while it may be small, there will always be something, Dr. Smekalova sensibly said.

Maybe there are two different positions: traditional or accelerationist, the latter pushing global neoliberalism forward. You have to choose. It might be traditionalism, it might be sustainability, it might be simply food and life-style fashion, but there is no reason to refuse what the future can give if it is useful, there is only a question of how public that ‘useful’ can be.

Institute of plant industry by the name of Nikolai Vavilov has its stations in several different locations and among them is the Pavlovsk experimental station near Saint Petersburg. The station contains an extensive collection of more than 5,000 varieties of fruits and berries, 90 % of which is found in no other research collection or gene bank. In 2010 the experimental station faced an uncertain future, because the land it sits on is being sold to a developer who plans to build private homes on the site. If this planned development goes forward, much of the collection will be lost. Due to technical issues and quarantine regulations, it would not be feasible to move the collection before demolition of the station is slated to begin.

<<
Svedjerug: A video essay
>>
Do you get up in the middle of the night to start baking?
Stories Archive